At some point in early 2016 the wishful phrase “we’ve always wanted to go” collided with the reality that “Sherry needs to practice her Spanish,” so we booked a trip to Andalusia in southern Spain for the fall. Not that one needs an excuse to visit this lovely part of the planet!

What makes this region of Spain striking? Awe-inspiring cathedrals and palaces, dating back to the 1st century. Hillside towns in whitewashed splendor and olive groves as far as the eye could see. Fascinating architecture. The early history of this region is largely defined by conflicts between the Islamic Moors from northern Africa, Jews, and Christians, and those conflicts in turn influenced many aspects of their culture. 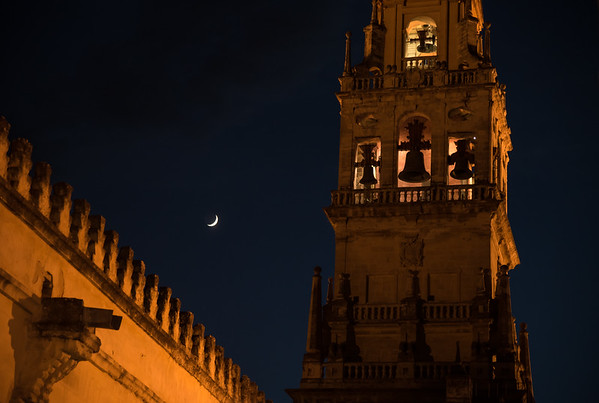 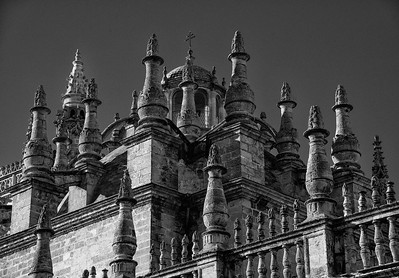 While I wasn’t able to get as many images of the stunning countryside as I wished, I practically overdosed on the architecture. Centuries-old Spanish buildings are the result of a wonderfully intricate hybrid of diverse cultures. Take for example, the Mezquita-Cathedral in Cordoba, Spain, which was built by the Moors of northern Africa and then converted to a cathedral when the Christians conquered them in the 12th century. Rather than tear down the mosque, they replaced the minaret with a bell tower (above). In Seville, however, the cathedral keeps a minaret and spires as part of its roof (at left).

Another example is the Alhambra Palace in Granada (below), which was the birthplace of modern Spain by consequence of the marriage of Ferdinand and Isabella (who you might remember financed Columbus’s trip to the New World).

I love details and patterns, because they often reveal a hidden beauty that we might miss as we take in the grandeur of a place. Whether an old door, a fountain, or the interior arches of a mosque, I found plenty during our visit.

The music, of course, is flamenco, after the dance style that was created in this region in the late 1700’s and is performed by street musicians seemingly around every corner. The alleyways of the old sections of the cities seemed to practically beckon us to stroll down them, teasing us with the fantasy of stepping back into an earlier era.

My biggest surprise from the trip: an introduction to Antoni Gaudi, the architect most identified with Spanish modernism. His otherworldly Sagrada Familia Cathedral in Barcelona (at right) is complemented by several houses he built in the city to show a whimsy that reminds me of Dr. Suess. Gaudi was famously detailed, and even created the calligraphy that identifies the doors on his Casa Battló (far right).

For more images of our trip, click here. And for the first time, I’ve put together a slide show of these same images set to music by Valentino Vallente, a street musician who captivated us during lunch in a small plaza in Seville one day. You can watch the 3:23-minute Youtube video by clicking here.

As a photographer, I’m always trying to capture the beauty I see in the world. And after an election season full of invective, anger and a disheartening willingness to publicly express mankind’s ugliest thoughts, it seems that we could all use a reminder of the beauty in our world. I hope that my images provide that for you, even if only for a moment.